Gardai have appealed for help after it emerged that thieves stealing copper wire from an ESB substation caused a massive fire costing€10million worth of damage.

The ESB has revealed that 120,000 customers were left without power when the 220KV substation in Inchicore, South Dublin was targeted last night.

In a statement, released this evening by Crimestoppers, it was confirmed that the damage was caused by “third party interference”.

“Following an initial investigation by ESB Networks it has become apparent that this incident was caused by third party interference, where thieves were attempting to steal copper wire from the site. 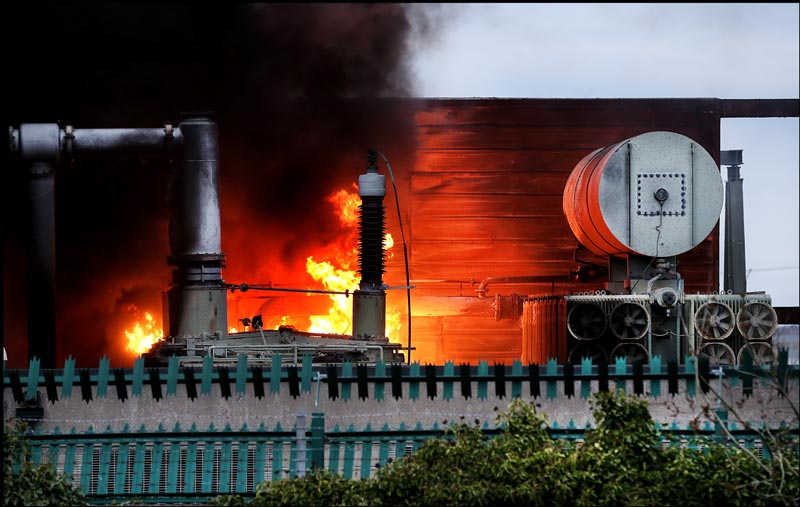 “The overall cost to ESB of this incident is estimated at up to €10million.”

A spokesman for Crimestoppers also confirmed that there will be a reward for information that leads to a prosecution in this case.

ESB Networks has reminded the public and perpetrators of the criminal activity of the dangers of interfering with our electricity infrastructure.

“Such interference is a highly dangerous activity with the perpetrators putting their lives and the lives of others at risk.”

The massive blaze caused the loss of electricity supply to customers across Inchicore, Lucan, Tallaght and Rathfarnham and other parts of West Dublin for 50 minutes.

Since 2012, over 150km of copper valued at €3million has been stolen, with a replacement cost to ESB Networks at €28million. The rise in thefts forced the electricity supplier to launch a nationwide campaign last August.

Local councillor Daithí deRoiste (FF) has blasted the thieves, explaining that a huge number of people were adversely affected by the power-cut.

“This is an utter disgrace. These people are nothing but scumbags who care only about themselves.”

Cllr deRoiste explained that parts of West Dublin were thrown into darkness on Sunday night when the fire broke out.

“The amount of people without electricity was phenomenal. The amount of children who went to bed hungry because there was no way of cooking food and all the restaurants were closed.

“The ESB said it cost €10million but that doesn’t take account of the money lost by businesses. Managers and owners had to send staff home early because they couldn’t stay open.

“A lot of these staff went without wages.”

Crimestoppers, an Garda Síochána and ESB Networks are calling on members of the public to be vigilant for suspicious activity and to come forward with information.

Such information can be given anonymously to the Crimestoppers confidential telephone service by calling 1800 25 00 25.

Alternatively, information can be provided to your local Garda station or ESB Networks on 1850 372 999.

ESB Networks have reminded customers of the precautionary measures to take in the event of a power cut: