Dangerous criminals targeting overhead power lines across Scotland have been urged to stop before their actions lead to someone being killed.

Following a spate of reckless thefts, ScottishPower has warned that it is only a matter of time before a life is lost, and has set aside a record £20,000 to provide individual rewards to those who offer information, which directly leads to the successful conviction for theft of those involved in the offence. Around 20 similar incidents have been reported across Central Scotland in just over two weeks, with thieves targeting power lines in farms and rural locations. The criminals are engaging in highly dangerous behaviour that could lead to death by cutting down live power lines that can carry up to 11,000 volts of electricity, and their actions could cause fires in nearby properties, or even cause traffic accidents if brought down near roads.

Recent incidents have been recorded in South and Central Scotland, including Milngavie, Dalry, Shotts, Falkirk, Kilbarchan, Larkhall and Slamannan. In one incident a power line was brought down across a road, and was struck by a truck, causing a temporary power cut for 1,500 homes. A theft in 2013 from a substation in Greenock last year resulted in two serious house fires and more than 200 properties experiencing an extended power outage, whilst engineers checked each individual property for safety. In 2011, a botched cable theft in Glasgow saw a 30 minute power outage for 50,000 properties in the Southside. 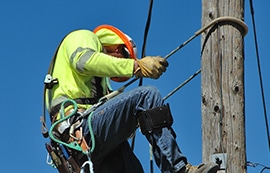 Guy Jefferson, Network Operations Director at SP Energy Networks, said: “These recent thefts have been deeply concerning, and we are closely working with Police Scotland to catch those responsible. I’d urge anyone who spots suspicious behaviour near our power lines to report what they have seen to the Police. The thefts can also cause power interruptions, which are a major inconvenience. In the event of any power supply problems, the sooner they are reported to our hotline, the quicker we can respond. “Metal theft is one of the biggest threats to the safety of the electricity network, and the impact of these crimes can be devastating.

In recent years we have witnessed house fires and damaged electrical appliances in homes. One man died recently attempting to steal copper from an electricity pole in Lanarkshire, and others have suffered horrific burns, loss of limbs and scarring. Unfortunately it seems like the thieves don’t care about the risk to their own lives, and they certainly show no regard for the safety of neighbouring properties. “We continue to increase our own security measures, and work closely with the Police and other industries affected by this crime. Our key objective is to operate a safe and reliable electricity network, and we hope that planned changes to legislation will help to stop these criminals who don’t care about the damage they inflict on communities.”

The stolen metal typically ends up being passed through dishonest scrap merchants, on the way to being exported around the world. New proposed legislation will prevent scrap metal dealers paying cash for materials, which will block the criminal gangs from selling their stolen metal. At the beginning of the month (6th August) ScottishPower Energy Networks met with Cabinet Secretary for Justice, Kenny MacAskill MSP, to discuss the tougher sanctions against metal theft that are proposed as part of new legislation. The new legislation will aid the efforts of Police Scotland and other agencies, who have been targeting the criminal gangs and the small band of dishonest scrap dealers for many years with a variety of specialist operations and investigations.

Speaking at the start of the month, Cabinet Secretary for Justice, Kenny MacAskill MSP, said: “Metal theft is simply not a victimless crime. As recent incidents have shown, the actions of a selfish minority create unnecessary cost, danger and disruption for the rest of the community. “That is why the Scottish Government is bringing in tough new legislation to address metal theft, ensuring that all dealers are licensed and eliminating cash payments. We are also introducing better record keeping and identity checks to tackle this widespread problem. “By reducing the outlets for stolen metal and the lure of ready cash we believe we can remove the incentive to steal.

“With tough legislation and enforcement, and continued work with police, companies like ScottishPower and the majority of reputable metal dealers, we believe we can end this crime.”

ScottishPower is encouraging anyone who can provide information on the recent spate of thefts to either contact the Police, or to call the company’s 24 hour hotline on 0800 092 9290. The company is willing to set aside a record £20,000 to provide individual rewards to those who offer information, which directly leads to the successful conviction for theft of those involved in the offence.

• Recent incidents have been recorded across Central and Southern Scotland including Milngavie, Dalry, Falkirk, Shotts, Kilbarchan, Larkhall, Crossford and Slamannan

• Over 70,000 homes exposed to increased risks of faults or potential damage

• Over 6,000 man-hours spent on repairs and reinforcements

• 50,000 homes in Glasgow lost power supplies for 30 minutes in November 2011 after an attempted theft

• 2 serious house fires in Greenock in November 2013 after a theft from a substation. More than 200 homes experienced an extended power outage until safety checks could be completed

• 50 homes in Kilbarchan, Renfrewshire, experienced damaged appliances after a theft from a substation in May 2013

• A fatality of a 43 year old man occurred in July 2013 following an attempted theft from a pole mounted substation in Lanarkshire.